Lessons Learned from Holidays Past: Your Pet’s Guide to Holiday Safety.

The holiday season is coming up fast, and if you don’t brush up on your pet holiday hazards, you may be in for an unpleasant veterinary emergency visit before the end of the year. One of the reasons we love our pets so much is their inquisitive nature, but that curiosity gets them into trouble, especially when all sorts of shiny decorations, tasty treats, and chaotic celebrations are around. Before the first holiday of the season arrives, check out the following cautionary tales of pets who were too mischievous for their own good.

Harley the chubby English bulldog had long suffered being dressed up in embarrassing outfits. From baby bonnets and diapers, to top hats and snazzy suit vests, Harley has worn it all, much to his chagrin. Because of his past tolerance, his family thought he would look adorable as a triceratops for Halloween. They unearthed his old triceratops costume, and attempted to stuff their pooch into his outfit but, unfortunately, Harley had been sneaking too many treats from the grandkids and had put on a few extra pounds. But, determined to stuff the pooch into his costume, Harley’s mom sewed on additional ties to cinch her dog in tightly.

When the big night rolled around, Harley was tied into his triceratops suit. After a few laps around the house checking in with visiting family and friends, Harley’s tongue was lolling out and he was gasping for air. A friend saw what was happening and untied the costume, ripping the poor pup out of his too-tight outfit. Thankfully, Harley quickly recovered after gulping in fresh air, but it was a close call.

Thanksgiving was always Tucker the Labrador’s favorite holiday—the smells, the kitchen messes, the table covered in tantalizing treats, and the overflowing trash can. Normally, Tucker’s family caught him before he got into too much mischief, but this year was more hectic than usual.

As family members began to arrive for the holiday feast, Tucker sniffed a delightful aroma coming from the street. “Oh, boy!” he exclaimed. “I would know that smell anywhere!” Following his nose, Tucker wove between legs, coats, and casserole dishes, and darted out the open door, heading for the car carrying the roasted turkey. The car door had been left open while other dishes had been carried inside, and Tucker saw his chance, snatched a meaty turkey leg and, unnoticed by the family, ran to the backyard to gnaw on his prize.

Tucker dimly heard gasps of horror when the family discovered the damage, and then the missing dog. They quickly put two and two together, and realized Tucker was the thief, but when he refused to come to their calls, they set out to search the neighborhood, fearing the worst.

They returned home dejected because they could not find their missing dog, only to see him strolling from the backyard, smelling strongly of roasted turkey. They checked to see if he had eaten any bones and would perhaps require surgery to remove the splintered pieces. Thankfully, Tucker was a delicate eater and had nibbled each morsel off the bone, leaving behind the pieces that could have become deadly obstructions. But, Tucker did not make it through Thanksgiving unscathed—he developed an impressive case of diarrhea from his fatty meal that required a visit to Dr. Butler and several days to resolve. 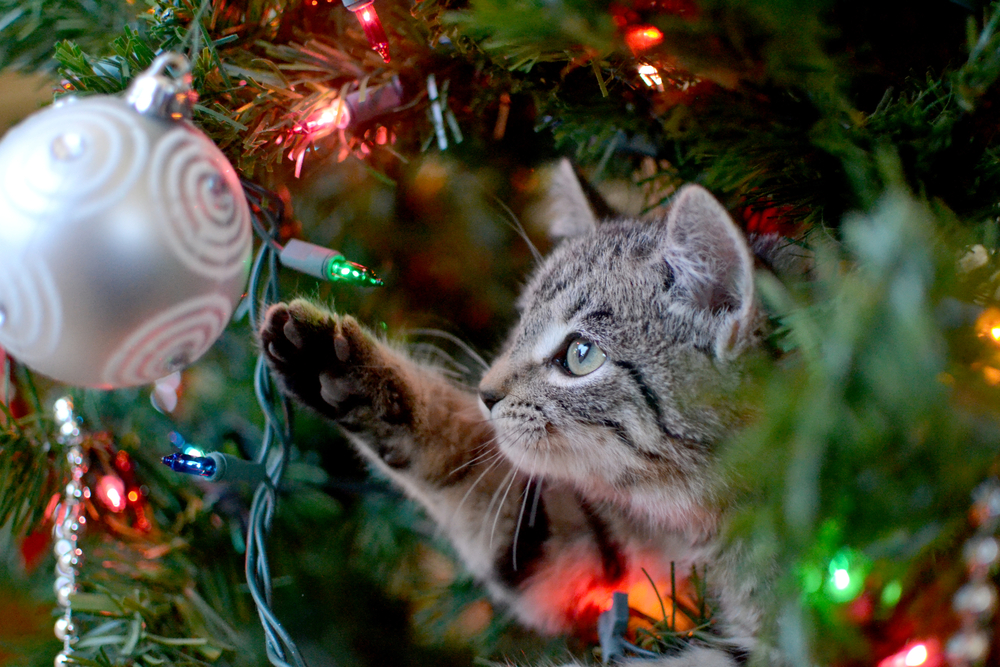 Celeste the frisky kitten was always in the midst of everything, eager to join the fun. As her first Christmas approached, she was excited to bat the shiny balls and glittery strings hanging from the indoor tree, and to dive into all the crinkly paper. Celeste had a ball with the Christmas tree and the season’s finery—literally. Not a single glass ball lasted on the tree, but with her feline reflexes, Celeste was able to avoid the broken glass shards littering the floor.

Next, Celeste attacked the tinsel that dangled from every branch. Although a tiny kitten, she packed a punch when she leapt from the couch onto the nearest branch, and the tree toppled to the ground. Delighted that now she could reach her quarry with ease, the feisty kitty tangled with the many tinsel strands, becoming as well-wrapped as a Christmas gift.

When Celeste’s family returned home, they were greeted with shattered ornaments, a fallen tree, and a tangled kitten—their holiday decor was ruined. They cut their naughty kitten free from her wrappings, and carefully cleaned up the mess. For the next several days, they kept a close eye on Celeste, monitoring her for decreased appetite, vomiting, diarrhea, or constipation, in case she had swallowed a tinsel strand that required surgical removal. Fortunately, Celeste stayed healthy, but she was blocked access to any future Christmas trees.

These three pets—and their families—learned how quickly holiday plans can go awry with the multitude of pet hazards lurking in costumes, tasty dishes, and decorations. Learn from their mistakes and keep your furry pal safe from harm this holiday season by pet-proofing your home.

Prepare your pet for the holidays by scheduling a microchip appointment, wellness exam, or vaccination appointment, to ensure you’re all set for visiting family and friends or holiday boarding. Your Homestead Animal Hospital team wishes your family happy holidays, and wants to remind you that we’re only a call away should your furry pal get into mischief this holiday season.